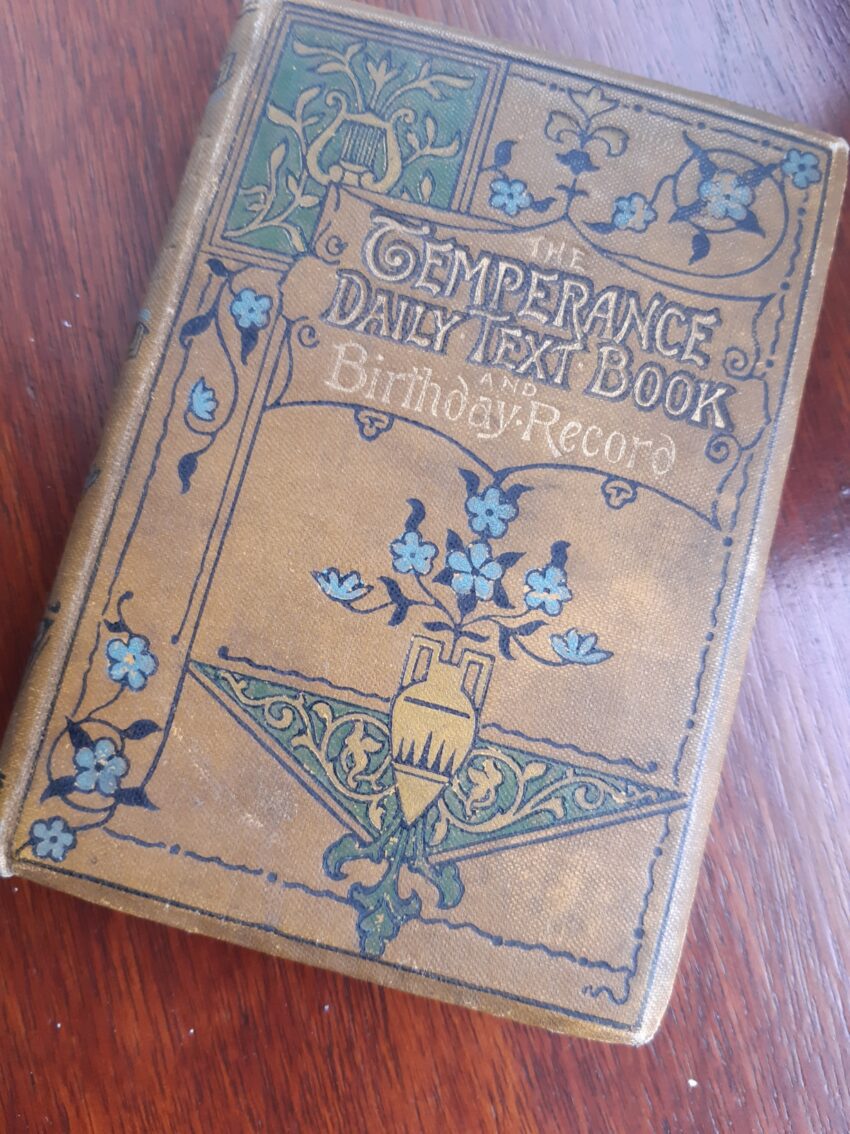 I recently purchased a small, pocket sized Temperance Daily Text book from a charity shop. It is a dual purpose book, incorporating pages to add birthdays.

The inscription in the front pages includes details of the recipient of the book from her sister and within further writings, birthdays are recorded for the parents. I decided to research who owned the book and who this family was and came from.

with best love from

I made a list of all the birthdays that were recorded in the book, including Charles Hunt (father) on 20th April and Mary (mother) 9th October:

There are a number of clues within the birthday entries including Laura L Hunt, born on 24 September which ties in with the date on the inscription in the cover. This must have been a birthday gift from Maria Hunt, her sister. Although Maria is not listed within the book, an entry on 4 October for Fanny Maria was of interest. I started building out a family tree.

Using the census data from 1901, I identified a family that could potentially match. The HUNT family were from Thetford in Norfolk. I decided to investigate further into the birthdays and tried to match to the information on the 1901 and 1891 censuses:

Noting that Maria COATES, mother-in-law to Charles HUNT, a maiden name for Mary HUNT could be assumed to be COATES.

I then built out the tree adding baptisms of the children of Charles & Mary HUNT. This confirmed I had the correct family complete with a marriage.

Charles’ father, Robert was a tradesman and Mary’s father, James was a labourer. Mary is listed as a schoolmistress.

The marriage record along with baptisms and census data, enabled me to build out the tree to include Laura L HUNT’s grandparents:

The Temperance Movement started in 1830 (around 1829 in Scotland & Ireland) with a number of organisations who were against the consumption of alcohol. Joseph Livesey and 6 other men signed a ‘pledge of total abstinence’ in Preston in 1832. Thought to be the first in England, the temperance movement aimed to educate young and old the perils of drink and the effects to the body, mind and attitude. [4]

By the mid 1800’s, temperance cafe’s, hotels, taverns and coffee houses were being built with huge investments from locals and business men who were alliance to the cause. Thomas Cook assisted with funding the Temperance Hall and Hotel in Leicester, a huge building built in 1853.[6] Temperance Halls and Hotel buildings were the place to go to meet others who were abstaining from drink, with bands (The Band of Hope was initially designed to educate children about the perils of drink), musical concerts, pledges and medals being given to those who kept to their oaths.

The Temperance Hotel in Norfolk may have been the venue where our HUNT family attended and why a temperance daily text & birthday record book was given to Laura L HUNT on her birthday.

This grand building called the Livingstone Hotel was both a Temperance Hall and a Hotel in the 19th century.[3, 5]

Further research into the HUNT family continues and I shall update in part 2 in due course. There are a number of surnames that appear more than once and I’ll investigate these too. If you have any connections to the HUNT family of Norfolk, please contact me.

I find the temperance movement a fascinating subject to research and will continue to pursue this as a topic of interest. More soon!

References and sources are below:

If you have an artifact, book or even a family bible and would like to trace a family, please do get in touch.